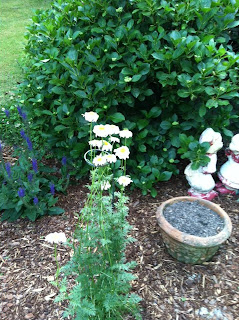 I planted Tansy in my herb garden about three years ago, and it was really pretty this year. It grows very tall and will droop over if you don’t provide a support around it.  I originally planted it next to the patio because I understand that it repelled mosquitos. At our house with this wet, humid weather, I would have to sit smack dab in the middle of hundreds of tansy plants to get the benefit. It is pretty and adds yellow daisy like flowers in the spring. I am going to cut it back about 1/3 and see if it will bloom again.

When I was reading about tansy, I found that it was most often included in the cloistered gardens of the monks in medieval times, and is in fact found in the garden at the Cloisters, a branch of the Metropolitan Museum in New York City.

If you want to increase your Tansy plants, dig them up in early spring or late fall when they are dormant.  Use a sharp knife or spade to divide in half, then if the plant is large enough, you can then divide again into quarters. If you don’t want to dig the whole plant up, use the spade to cut down the middle, leaving the other part intact.  Replant the divisions immediately, or keep the roots moist, and out of direct sun until you can plant them.

We promise not to send weeds (or spam). Plus, receive my FREE ebook on attracting beneficial insects to your garden!